Brain plasticity refers to the ability of the brain to change its structure and function in response to sensing, perceiving and learning. It was previously believed that the pathways and circuits in our brains are genetically pre-determined and essentially fixed. However, it is now well known that the brain has the ability to change, not only when it is developing from birth, but also in adulthood.  Many leading neuroscientists have described brain plasticity as the greatest discovery of our time.

Neuroplasticity refers to the ability of the brain network as a whole to change. This allows for new connections and new neurons to form, leading to the creation of new pathways for communication between brain areas.

Early Years of Life
Neuroplasticity is exemplified most dramatically at the beginning of life (when the immature brain grows and organizes itself), as well as in response to brain injury. In the first two years of life, as new pieces of information (such as language and observations from surroundings) are continuously experienced for the first time, new neurons and pathways are formed enabling memory of this new information.

Brain Injuries
Neuroplasticity has also been widely recognized in people with brain injuries. In response to a repetitive activity, the brain is able to compensate for damage to one area by recognizing and forming new connections between intact neurons in a non-damaged area.

For example, partial paralysis can be overcome as a result of neuroplasticity – continuous and repetitive activity of an immobile limb can over time lead to new connections and the memory of movement. A similar experience can be found in this video, which details the journey of a girl who had her entire right lobe removed (and consequently lost movement in her left side).

Plasticity through repetition and practice - musicians are an example
It is not only in infancy and in response to brain damage that the effects of neuroplasticity can be observed. Extensive scientific research has shown that neurons are constantly connecting and forming pathways in response to learning. For example, it has been shown that the gray matter in areas of the brain involved in playing a musical instrument (motor regions and temporal areas) are larger in professional musicians than non-musicians, which demonstrates plasticity through repetition and practice.

Language
A similar situation expounds in relation to language -  for example, constant and repetitive practice of the underlying elements of speech can lead to the formation of new neuronal connections, thus allowing increased pathways for better use of language.

Synaptic plasticity refers to the ability of the connections between already existing neurons to increase in strength. This is slightly more complex, but is also believed to increase and facilitate learning and memory.
Neurons that fire together wire together – when you experience two things simultaneously the brain wires them together 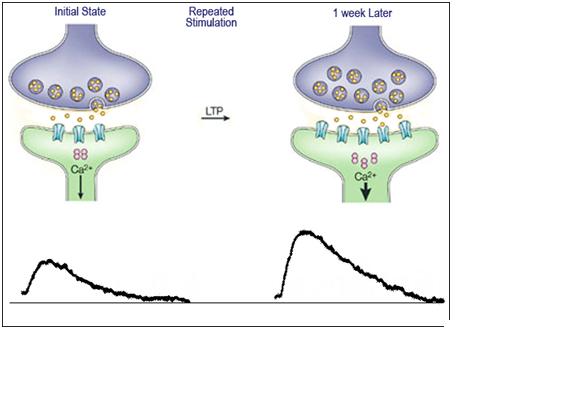