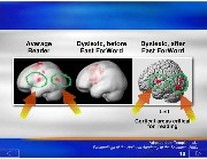 Thursday 01 Dec 2011 00:00 AM  In this study, Nadine Gaab and her colleagues investigated which regions of children's brains were active in response to rapid auditory stimuli, determining whether the activation patterns were similar in children with dyslexia and children with typically developing reading skills, whether these differences could be remediated, and whether the remediation would results in changes in language and reading scores.

Pre-tests showed that the students with dyslexia had reading skills that were significantly below the reading scores of their typically developing peers.

After using the Fast ForWord product, students' reading and language skills were re-evaluated. The students had made statistically-signiticant improvements in:
In addition, the students' cortical activity was re-evaluated. In children with dyslexia, there are no regions in the brain where they have significant differences between the cortical responses to fast transitions versus the cortical responses to slow transitions. After remediation, several regions were found where the differences in activation increased -- more similar to the activation patterns of children with typical development.

These results show that the neural circuitry of children with developmental dyslexia is plastic -- it can be changed.